Throughout the time of Post Marked: Piper’s Reach, one commentator has engaged with the series in such as way as to be almost a third author. Rus Vanwestervelt has given Jodi and Adam remarkable insight into each of their characters, articulating their psychology and motivation in ways neither of them could have envisaged.

Such is the impact of Rus’ insight and lengthy essays he posts after each letter that Jodi and Adam have coined a phrase: WWRT – What Would Rus Think?

With that in mind, Rus sent through a series of questions about Piper’s Reach to Jodi and Adam. They responded with four thousand words.

Drop into Rus’ site and get a behind the scenes look into the process and thinking behind Post Marked: Piper’s Reach.

Find the three parts of the interview at http://www.rusvw.net/

The only thing I expected from Adam was he’d write a compelling letter once a fortnight, and where possible, provide legible handwriting! ~ Jodi

Judge Whisky hosts us for the final hiatus interview today. An avid reader and supporter from the first letter, plus a self-proclaimed ‘non-commenter’ because of the emotional impact of the letters, Judge gets the dirt on the project’s inception, expectation and faith in partnerships, directional intentions and outcomes, the intersection of fiction and real life in characterisation, evolving a series soundtrack and just how far we dare to dream ahead. And, for those of you burning to know about jellyfish and breast implants…you won’t be disappointed.

Writing this series has exceeded my expectations. I get to write an intriguing character, balanced against the revelations of Jodi’s character, their former friendship, the knowledge they have now, and I get to have a lot of fun doing it. ~ Adam

Miss last week’s interview with Laura Meyer? You can read it here, including an interesting discussion in the comments section about strengthening craft by  living vicariously on the page.

Until we kicked into Season Two, I was doing well. I’d had my early teary moments as I excavated Ella-Louise’s past, and then I just got on with it. Ella-Louise kind of gave up trying to seduce Jude via letter and things settled into a holding pattern. ~ Jodi

We had the pleasure to be interviewed by Laura Meyer in the lead up to the conclusion of Season One.

Laura first interviewed us on April 2nd in the lead up to launch day. Today Laura revisits questions of form, story and direction, and throws in a few new one regarding fans, the difficulties of abiding by the No Spoilers Policy (NSP), how we’re coping with the emotional intensity of writing the serial and special questions deconstructing the characters of Jude and Ella-Louise.

Season Two has gone into a territory I didn’t think it would go so the emotional toll is heavier and more intense for me. It has made writing Jude a whole lot harder. ~ Adam

It’s epic, and you can read the complete interview here.

And thus we come to end of (what we are calling) Season One with a taster of what is to come in Season Two.

We thank you, our small, but dedicated cult following, who have spent the last five months with us as we’ve shared Ella-Louise and Jude’s story, passing it on to family and friends once you were hooked.

What began as a bit of a crazy idea at the end of 2009 and birthed earlier this year on a beach among wet, sandy, squealing children, has taken us on a journey neither of us really anticipated taking. Nine months later we have reached a point in the lives of our characters we never thought possible. We are intertwined intimately in their lives. They talk to us and are with us constantly.

We’ve been blessed to experience first hand, how readers become emotionally invested in characters, and care for them as much as we do. We know from comments that living vicariously through the lives of Jude and Ella-Louise has struck quiet moments of people’s lives, keeping them from reading, or pushing them to confront what’s inside. While it is a thrill to write Jude and Ella-Louise, it is also a responsibility we take seriously

Season 1 ends with Jude’s letter hinting at something BIG. Think of it as a season ending cliff-hanger. But you will have to wait as we take a two week break.

During the hiatus, our newest writing partners, Laura Meyer (@L_Meyer) and Joshua Londero (@judgewhisky), grill us about Piper’s Reach. We’ll post up links so you get all the interview/behind the scenes juiciness. Laura’s interview will be aired Tuesday, 4th September and Josh’s on the 11th September.

We’ve launched a Facebook Fan Page where all the readers can mingle and comment in the one place. At the moment there are a bunch of new and old photos up, including sneaky looks at the next three letters. We’d love to hear your thoughts on what comes next for Jude and Ella-Louise, or your thoughts on what happened at the reunion.

The final stop on the Post Marked: Piper’s Reach blog tour is with the wonderful Icy Sedgwick.

In today’s post, Icy asks us about how letter writing differs from traditional narrative story telling, dialogue in letters and how email has affected modern communication.

A letter is perhaps the one form where backstory is integral to understanding the characters, their relationship and their current situation. The events of the past inform the present. As the characters replay significant events from their past, they focus on their perspective of that moment – Adam

All my old friends and I lament the digital age and the fall from grace of letter writing. While we love being able to see what each other is doing on Facebook, have instant access to photos, status updates and to comment on them… we miss receiving a letter – Jodi

To read the rest of the interview, click here.

As we reach the eve of launch day of Post Marked: Piper’s Reach, today’s host is Rebecca Emin (@RebeccaEmin).

She asks us about how we came up with the idea before exploring the ups and downs, advantages and disadvantages of a collaborative project. 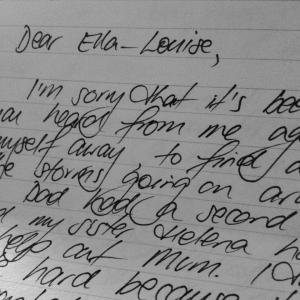 Writing collaboratively has always been a bigger and better experience than going solo for me. I find it almost intoxicating… Most of all I love watching my characters come alive through another writer – Jodi

We write independently of each other but the narratives are intrinsically tied to the other. We weave in and out of each other’s stories. The advantage of collaboration is the perspectives and insights another person provides. The downside to this project is the ‘no spoilers’ clause – Adam

Click to read the rest of the interview here.

As launch day approaches, we have a few more stops along the way. Today we drop in on Victoria Boulton (@Vicorva) and have a chat about why we wrote a story in letters. We also chat about the origin of our characters and how the narrative is affected by letters.

A letter is intimate and personal. It is a private, shared moment between two people – Adam

Ella-Louise is broken and burned out, living a sea change to try and reclaim her life. This is the most intimate connection I have ever had with a character. I’m drawn to the first person POV, but this is something altogether different – Jodi

Jude is the essential every man. But at the same time he’s vulnerable, he’s loyal and has a deep centred sense of place and purpose – Adam

To read the rest of the interview click here.

On the 6th day of the Post Marked: Piper’s Reach blog tour, we have the extraordinary privilege to be hosted by Australian fantasy, science fiction and romance writer Nicole Murphy.

When first brainstorming a project you find the most convenient format to establish the parameters. We used text messaging and Nicole asks “Why?”

Creating a fictional town as the setting for the project has its own challenges and we explore how we developed the town and its impact on the characters.

Location is important because where you live shapes who you are, what you do, the opportunities available (especially during adolescence) and the way people see and treat you – Jodi

We created the fictional town of Piper’s Reach before we even had characters. Location puts the characters into a frame of reference… it became the framework for understanding the relationship between the characters – Adam

My Mum used to ask why I could remember song lyrics better than my History or Mathematics homework. ~ Adam

I don’t remember a time without music (apparently I could sing ABBA before I could talk). ~ Jodi

Today’s launch ambassador is dark fantasy and horror author Alan Baxter, who is also a music aficionado of the top order. In preparation for the blog tour we slipped the playlist from the letters to-date to Alan and today’s interview evolved from there, looking at the influence of music on our lives and writing, and how music accidentally shaped the narrative, characters and the manner in which we’ve chosen to exploit the digital platform.

Ella-Louise uses music as a mirror to her past, and later the changing dynamic of her relationship with Jude. ~ Jodi

Even though they have different musical tastes, the music they share amplifies their emotional connection. ~ Adam

Read the full article at The Word According to Me.

Tuesday Serial is the place to read a wide range of weekly serial fiction. It is also the place where Post Marked: Piper’s Reach will be linked.

Today we are sipping virtual cups of tea, making ourselves comfortable and talking about the process of composing a serial, dividing up the work and our aims for the project.

With no real idea who our characters were, we continued to toss ideas back and forth. This is how we settled on the name of the town and its origins, the characters’ names and a little bit about their back story. We had no endpoint in mind when the first letter was written, a bit like a shot in the dark, a character hoping, trying, wanting to reconnect with the past, but not sure if there will be reciprocation. In this way, it felt “real” for the characters – Adam

To send a letter is a good way to go somewhere without moving anything but your heart. ~ Phyllis Theroux 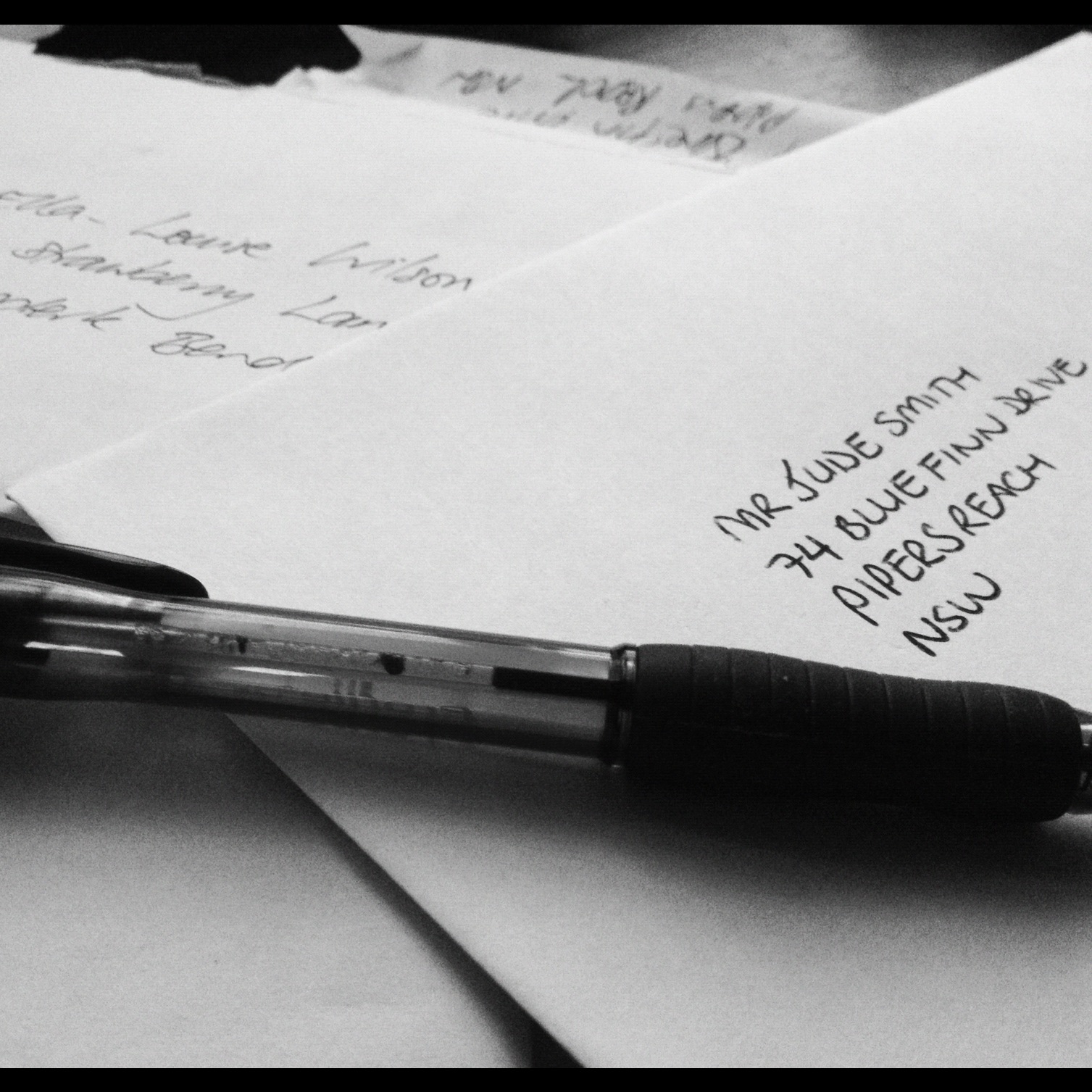 In December 1992 Ella-Louise Wilson boarded the Greyhound Coach for Sydney leaving behind the small coastal town of Piper’s Reach and her best friend and soulmate, Jude Smith. After twenty years of silence, a letter arrives at Piper’s Reach reopening wounds that never really healed. When the past reaches into the future, is it worth risking a second chance?

Jude is listening to…

Colin Hay's Waiting For My Real Life to Begin